“Not all those who wander are lost.” This is the quote that comes to mind to describe Tola. A true creative always in her own world thinking of new ways to make and be part of change. Having tried to get her on the phone unsuccessfully due to both our busy schedules, it made my day when we finally made time to speak. Our phone conversation for this interview was informative, inspiring and all around a breath of fresh air and when I was done, it made the ‘chase’ worth it.

She begins, “Such a heavy question [laughs] I’m a mix between Tupac and Kanye. I’m a creative. Just a girl from the Bronx trying to make my mark on the world and shift the culture.” Tola was born and raised in the Bronx, New York to a Nigerian father and an African American mother. She recalls her childhood being particularly difficult because of her father and him being a mean person who didn’t add much positivity to their home. Tola says, “My parents got divorced when I was 18 and that was the happiest day of my life.” Unlike many children who are products of divorced parents, Tola believes her parent’s divorce was the best thing to ever happen to her. She explains experiencing her parent’s divorce drew strength within her and made her realize she doesn’t have to take anything from anyone. It also gave her the time to think clearly and brought her peace of mind. I asked Tola, at what point did she realize she was a natural creative she says “At 10, I used to drag my mum to Woolworth, K-Mart and all that so I could get materials to make and sell to her friends. My mum was always my first investor.” Tola remembers feeling ‘rich’ after she made a thousand dollars her senior year of high school from stuff she created and sold.

As Tola got older, she always knew she wanted to be in entertainment but wasn’t sure in what capacity. In high school and college, she held a lot of leadership roles such as class president, vice president & NAACP treasurer she also made sure she kept busy by scoring internships with Jive, Epic & MTV. She was also The Black Student Union president her junior and senior years of college. Based on her ability to find and create opportunities in college, she was appointed peer advisor and youth speaker. Post college, she started her career doing beauty PR and then proceeded to be an assistant at MTV in the global digital department (2005-2010) which at the time was a big deal as that aspect of the industry was just beginning to take off. She also did freelance work with the Blue Flame Agency where she worked in major marketing ads for Cîroc and also closely with Diddy on his Last Train to Paris Album. She also worked at Centric and BET and notes that most of her career was spent at VIACOM. All her roles directly reflected her marketing abilities but her last role as brand solution manager solidified what she already knew. She got to work on Being Mary Jane, The BET Awards/Experience, Hip Hop Awards, Soul Train Awards, and Celebration of Gospel. Being among people who looked like her and making such an impact was a great experience for her.

Tola was laid off in 2014 and that turned out to be a major blessing for her because it made her realize she needed to get out there and actually take her speaking seriously. She went on a speaking tour with Black Enterprise October – December 2014. In 2015 however, she says she hit rock bottom. She started counseling thanks to her mum who thought she was losing her mind not having anything to do so she suggested and paid for therapy. This allowed her to stay focused on her speaking as it kept her busy and gave her something to look forward to. In that year, Reservation for 10 and Girl Wonder, two non-profits geared towards the youth took off. 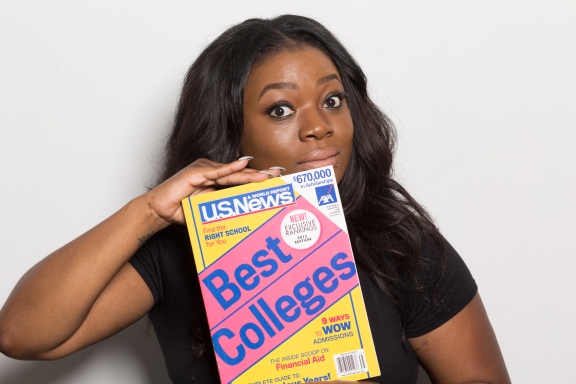 Girl Wonder (website, Twitter, Instagram)– A mission to help girls between 13 – 18 with the trajectory of their lives through self-care, empowerment, self-love and professional development. She calls Girl Wonder her pride and joy. “It has become bigger than me and a lot of people are watching and I can’t disappoint.” In December 2016, Girl Wonder was invited to the White House by the Assistant Director of the White House initiative on educational excellence for African Americans.

Reservation for 10 (Instagram) – She jokes “it’s actually for 30 but 10 sounded cooler.” This is an organization that brings together thirty minority students and an executive in any major industry. The kids get to attend dinner with the executive and find out about the field and seek mentorship.

What’s next for Tola? She is currently Assistant Director of College Success at a Charter School in Brooklyn. Her vision is to create chapters for Girl Wonder in different states and have regional representatives. She wants to have the ability to offer scholarships to a girl in each region. She says, “I want to be known as a brand & marketing executive and a youth educator.” Her short term goal is to create an annual summit to inspire the girls who are part of Girl Wonder. Finally, I ask, what keeps you going? “In 2015 when I thought I was going to get wiped out, I always remembered this quote by Christopher McDougall” “Every morning in Africa, a gazelle wakes up, it knows it must outrun the fastest lion or it will be killed. Every morning in Africa, a lion wakes up. It knows it must run faster than the slowest gazelle, or it will starve. It doesn’t matter whether you’re the lion or a gazelle-when the sun comes up, you’d better be running.” Every morning she got up and put one foot in front of the other. Step by step, piece by piece it moved her to the bigger picture. LinkedIn, Instagram, Facebook

It is evident that in addition to being a creative, Tola is resilient, a trait any person with ambition possesses. Things will not always go according to plan but as long as you keep it moving, it will always work out. No one is too big or too small to change the world you just have to try, fight like hell and as I always say, TRUST YOUR PROCESS!!!!