France is like a boyfriend; he gets on your nerves all the time but you can’t seem to leave him. You hate him one moment and are head over heels in love the next. In February 2016, I packed up most of my belongings and headed to Bordeaux with my reluctant mother who had no desire to come along as she had more exciting things to do back home in Nigeria. The last time I was in France, I was 8 years old visiting Disneyland Paris, so I sure wasn’t about to embark on this journey in this new territory on my own.

I’m Oluwaseyi “Shay” Bank-Oni, an MBA candidate specializing in Marketing & Brand Management at a Business school in Bordeaux, France. “Why France?” everyone asks; I tend to respond with my usual spiel on how I learned French in university but forgot it all due to lack of practice, but now I flip the question and ask “why not?” 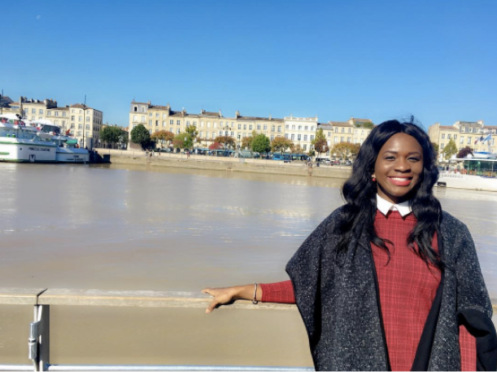 Why the heck not? Life is not meant to be lived in one place. Living in a foreign country opens you up to endless possibilities and shifts your perspective in ways you could never imagine. You meet new, interesting and diverse people and establish lifelong friendships. You start to dream bigger, open your mind wider, grow in ways you never imagined and hunger for more.

Cringe worthy confession: Prior to moving, I thought France was a bilingual country. I lived in Canada, an English & French speaking country, and erroneously assumed France was the same. Don’t judge me, we’re all prone to bouts of ignorance every now and then, besides I learned my lesson the hard way. Arriving in one of the greatest wine regions in the world had me giddy upon seeing the life sized wine bottles that lined the airport arrival hall. “I must be in heaven” I thought to myself; If you know me, you know how I feel about wine. It was only after my mother and I had gotten into a taxi from the airport, that I realized what exactly I had gotten myself into.

“Desolé, mon français est mal- Sorry, my French is bad” became my go-to phrase as I shoved my IPhone loaded with phrases in my google translate app into the hands of every French person I needed to interact with. A little over a week after our arrival in France, my mom returned to Nigeria and for the first time in my life, I was truly on my own.

Let Me Tell You A Bit About My Boyfriend…

Paris and France are not synonyms: Seriously. Friends and family always ask me questions related to Paris though I live a 5-hour car ride/ 4-hour train ride/ 50-minute plane ride away. I eventually got tired of repeating “I live in Bordeaux NOT Paris” and accepted the fact that to some, Paris is the only city in France, and I live in the Eiffel tower.

Canada vs. USA: I lived in the States for two years prior to living in Canada and I can assure you these are two very different countries. Not according to the French though. I’m always referred to as American, because apparently c’est la même chose- it’s the same thing, and the only time my Canadian-ness is acknowledged is when someone needs to let me know Canadian French sounds akin to nails on a chalkboard. Faire la bise: I must have kissed at least a hundred people on the cheek since moving here. This is not an exaggeration. You walk into an Apèro and kiss each person on both sides of the cheek. I have been called out multiple times for not actually making skin contact and my excuse for not wanting to get makeup on the other party was met with a disapproving “Oh lo loooo!,”an expression which has various meanings but in this context means “Oh please, give me a break!”. I eventually got the hang of it though I ended up in a lot of awkward situations when I attempted to faire la bise at social gatherings upon returning to Toronto over the Christmas break. One kiss, no problem. Two kisses, “What are you doing?”

L’Apèro: Ah, one of the major highlights of French living. Apèro’s are social gatherings which involve a lot of wine, bread, cheese and charcuterie. I learned fairly quickly that you can’t show up to an apèro empty handed, but c’est pas grave- no big deal, a quick stop at the grocery store to pick up some wine or at the boulangerie- bakery to pick up some baguettes and you’re good to go!

As I wrap up my MBA and reflect on this journey, I cannot but think of how far I’ve come. Leaving my comfort zone and moving halfway across the world to a foreign land with no friends or family was the scariest yet most rewarding experience of my life. I encourage and implore any and everyone who has the chance, to move to a different country or immerse themselves completely in a different culture. Just like in any relationship, France and I have been through ups, downs, twists and turns. I have laughed, I have cried, I have threatened to leave and sworn I’d stay forever. I leave here in a few weeks with a renewed mindset, the patience of a saint, an unshakeable sense of self and hungrier for success more than ever before; honestly the MBA is just the icing on the cake. I also picked up a bit of Spanish, but that’s a story for another post. Accomplishing my goals is great, but truly living while I’m at it is even better. Through it all France now occupies a baguette shaped space in my heart that can never be replaced. Franchement,- Honestly, France is my boyfriend.

Nervous about getting out of your comfort zone? I hope Seyi’s story about her time in France inspires you to get out and just LIVE. If you’re interested in finding out more and possibly head to France yourself, you can contact Seyi via LinkedIn. I hope you enjoyed this rant. Have a great week Goal Diggers. 🙂