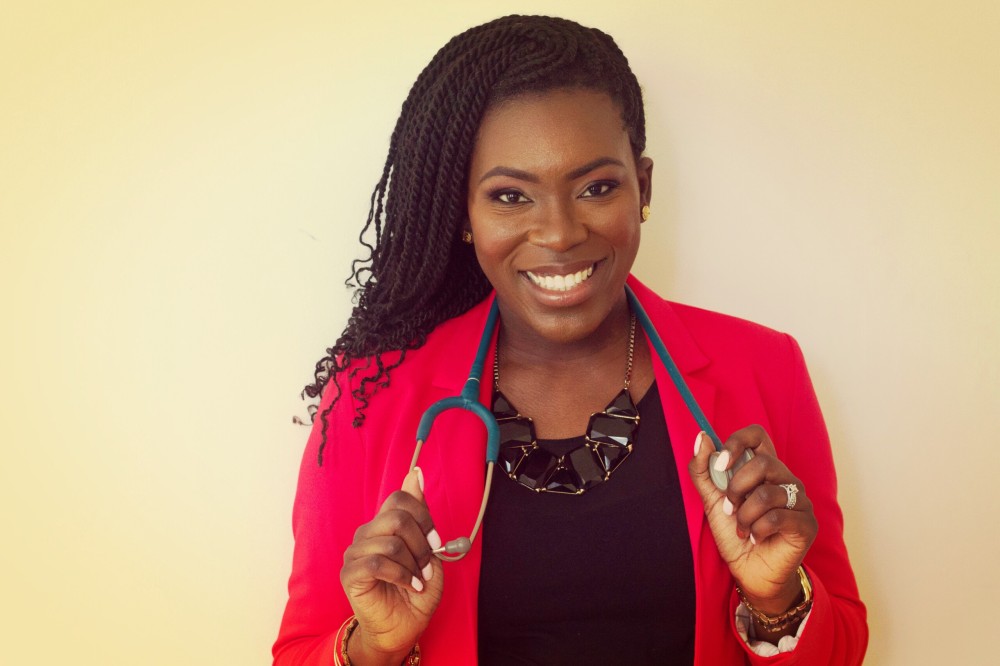 Positive, hardworking and caring. In her usual happy mood, she introduced herself to me the day I met her and she was very encouraging about the blog. As I asked her what she did, she handed me her card and mentioned she’s a nurse and she also runs her business where she’s a motivational speaker for people in the medical field. Of course, I immediately knew there was a story to tell…

She begins, “Born and raised here but I am Ghanaian. I’m also a south sider like Michelle Obama [laughs]. I’m just very driven. I’ve always had things I wanted to do and I get laser focused on getting them done and then I look for the next thing to conquer. I’m always busy but I like it that way.” Growing up in a Ghanaian household, the importance of getting an education was always enforced. Her dad has a Ph.D. from the University of Chicago and has been a professor since. She jokes, “My dad would always push us to be better. Getting an A was expected he would even ask where the plus is.” Her mum is a nurse as well and she says initially starting her career, she rejected the idea of being a nurse. She credits the rejection for nursing to her sense of rebellion constantly rejecting the idea of ‘being like her mom.’ Afenya studied marketing at U of I (Urbana Champaign) consumer & textile was her focus and her dream was to somehow become a business woman through fashion and get to attend fashion shows around the world. While the industry is fun, for her it was a phase and she was more taken by the idea of it all but lacked the passion to build a career with it. At the point where the shift happened, Afenya took a step back to figure herself out and think about what she wanted to do. It was then her husband suggested she should do nursing. She says her whole family always knew she would be a nurse because they saw it as a calling for her but she vehemently denied the idea of it until she tried it and ended up loving it.

Afenya became a nurse in 2012. Before then, she had to go back to school to start over because she had no science background. Prior to that, she got a CNA certification and throughout the process, she was pregnant with her first child. When she started her nursing degree, she recently had a baby and worried about how she would balance being a mother and wife while being a student. She recalls her dad telling her, “Don’t worry about the time and what you need to balance, everything will fall into place just go ahead with what it is you want to do. If it’s the time you’re worried about, you will get that time regardless.” Afenya could balance being a family woman and a student because she understood that everything she was sacrificing was temporary and she would eventually be rewarded for it.  As she completed her nursing degree, Afenya had her second child and by the time she was completing her masters, she had her third child. She says, “I turned in some of my work from the delivery room and I would email my professors ahead of time letting them know my work will be a little late but I never let that stop me from doing what needed to be done.” Each time she was going through a program, she was pregnant and she jokes, “Maybe if I have one more I’ll get my million dollars.” At the time Afenya started the journey to becoming a nurse, she was leaving her job in fashion where she was a manager on the path to becoming a director. It was a humbling experience as she had to learn everything from the very beginning.

Afenya’s career in the medical field started with her being a CNA and then she became a nurse. During her time as a nurse on the medical surgical floor, she fell in love with the acute care of patients and knew she wanted to stay within that aspect of medicine. It was then Afenya decided to go back for a Masters in leadership. Acquiring this degree led her to become a manager of the medical surgical unit at the hospital where she worked. She was offered a job at a different hospital and during her time there she recognized the lack of diversity. She raised her concern and her job decided to make her the head of diversity & inclusion at the hospital. Looking back at the journey, she credits it to just being able to recognize an opportunity and taking it. She says, “I was always able to stay laser focused on my end goal and vision and that just helps me make sense of everything.”

She wants to take her motivational speaking further by using it to empower women and advocate for diversity and inclusion in the business/work space. Afenya would also like to use her business to help people transition from working for someone to becoming entrepreneurs. Her end goal is to become the go to person for women in medicine either looking to start a career or transition from one part of medicine to the next.

What’s the lesson in Afenya’s story?  Whatever you want to achieve, focus on the end goal and don’t worry about the different things that can go wrong. Have a vision, have a plan but be flexible. As I always say, there are many ways to skin a cat.

Many times, as women, we tend to plan our lives around everyone else. Afenya got through all three programs she went back for at different times while she was pregnant. She didn’t let the idea of being a wife and mother stop her rather, she made it her motivation. We tend to put our goals on hold because we have this idea that if we achieve too much, love and happiness won’t find us but truth is, it is when you’re in your groove doing you that true happiness comes and once that happens, love will find its way to you. Don’t worry too much about controlling the outcome focus on your goals and do what’s in your power to accomplish them and just watch everything fall into place.

I hope this rant about Afenya inspires you to take that risk today. The hardest part is starting but once you do, you’ll love yourself for taking the risk.